My first introduction to seafood was working as a waitress in Faneuil Hall. I was 20, a vegetarian, and slightly traumatized by the experience of eating anything with tentacles-i thought they belonged in scary stories, definitely NOT in my stomach! However, upon eating fried calamari with spicy peppers and a lemon garlic aioli, I was surprised to find that I in fact loved the flavor (although, to be honest, you can fry just about anything, and I will think it tastes yummy). 6 years has passed since then, and I will eat all creatures, great and small : )
For my Foodbuzz 24-24-24 May event, I decided to eat my way up the food chain in Boston, stopping at historical as well as contemporary seafood restaurants. All sea creatures rely on other sea creatures for food to survive. At the bottom of the food chain are the sea plants and plankton. Many types of fish and animals such as the snail, shrimp, jellyfish, and sea star eat the plankton. The small animals and fish who eat plankton then become food for larger crustaceans, such as lobster or fish such as tuna or mackeral. Octopus prey on lobster (try searching for these oceanic show-downs on you-tube, it is great fun, I promise you!) These fish are then eaten by larger fish and animals, such as the shark and dolphin. 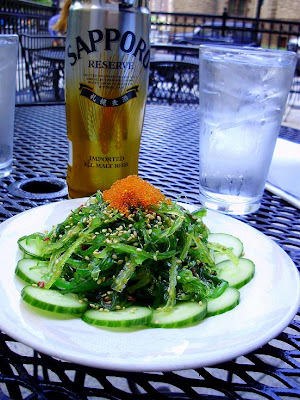 I set out upon this odyssey with my boyfriend. Our first stop was Skipjack's Seafood Restaurant located near the Copley Church. We shared a sesame-seaweed salad with salmon roe. I had a Sapporo-a delicious if not extremely large Japanese beer. 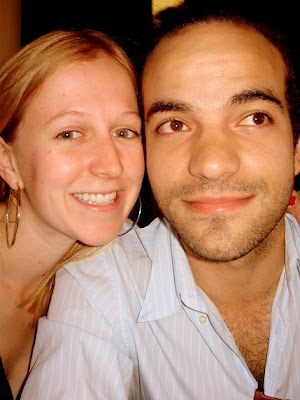 Haymarket occurs every Friday and Saturday between Faneuil Hall and the North End, Boston's Little Italy. For 1 dollar, you could purchase clams on the half shell in the market. Fresh vegetables, fruits, seafood and meats can be found for great prices. I am a bit of a wimp when it comes to eating raw fish...more so when it's sold on the street, but others were slurping away, enjoying their clams and then tossing the shells into a bucket next to the stand. 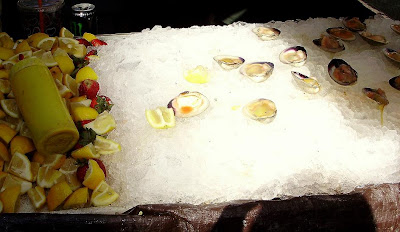 Our next stop was at Union Oyster House, America's oldest restaurant. It opened in 1826 and served many famous Bostonians, such as Daniel Webster, as stated in the sign below. 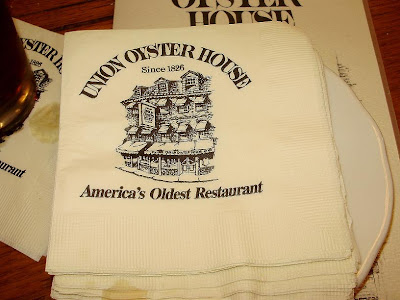 Our seafood platter was comprised of oysters, shrimp and clams, slightly higher on the totem pole than roe and seaweed. Horseradish, lemon and cocktail sauce were served alongside. Sitting at the oyster bar is a very no-nonsense experience, full of the famous Boston charm...I say this with a wry grin. Bostonians are known for being less-than-friendly, but once you get to know them, most are incredibly generous-you just have to get through the tough, protective exterior (much like the oysters our servers were shucking) before you can truly appreciate their personalities. 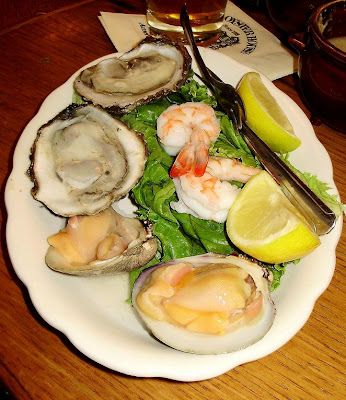 For local oyster lovers, the ninth annual Wellfleet OysterFest takes place the weekend after Columbus Day in Wellfleet, Cape Cod, Mass. This two-day street party celebrates the town's famous oysters, clams and shellfishing traditions and brings together locals and visitors alike for a weekend full of hometown flavor and big time fun. More information can be found at:
http://www.wellfleetoysterfest.org/ 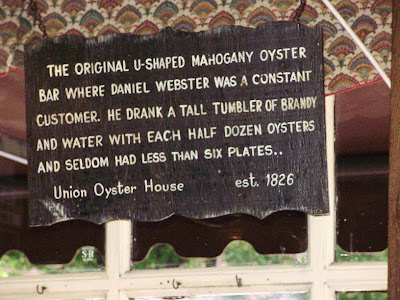 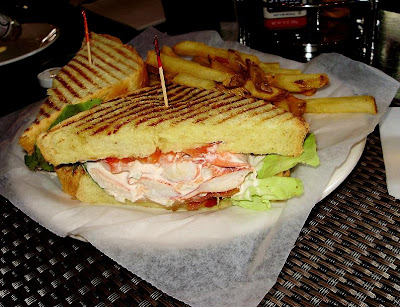 Our next stop was at Ned Devine's, an Irish restaurant in Faneuil Hall. Ned Devine's serves consistently good pub fare and local seafood. We shared a lobster roll BLT...it was my first lobster salad (I am ashamed to say) and is a classic Boston sandwich, chunks of lobster meat, mayo, perhaps some mustard or lemon. Served with lettuce, tomato and crispy bacon kicked it up a notch, adding texture and flavor. 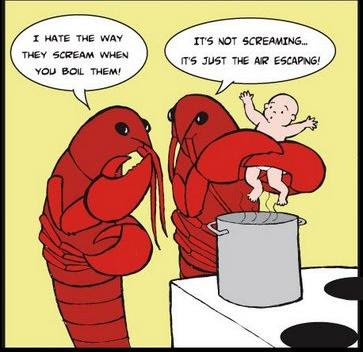 Our last stop was at Tapeo Restaurant, a Spanish tapas spot on Newbury Street. There we ordered octopus, served in a fiery paprika and olive oil sauce. Although it appears small on the plate, the octopus can take out more sea creatures that it'd care to admit (if it could speak). On the plate, the meat was tender, not chewy and a light ending to our many meals. 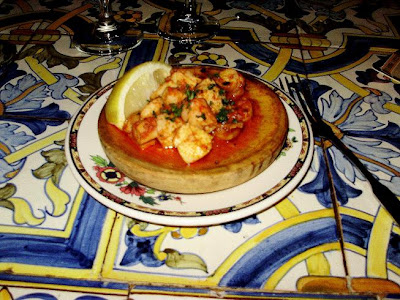 At the top of the seafood chain is the shark. And who eats the shark? Apparently not us that night! Try as we might, shark evaded us that evening. Perhaps due to overfishing, perhaps due to its intelligence and fierce teeth, we may never know the reason that shark was lacking on every menu Saturday night. Having had mako shark in Chile, I assure you, it is delicious! And, really, I have no qualms about eating any creature that also could make a meal out of me. Look out sharks! Next time you shall not be so lucky. Rather you will be sauteed and served with a lovely sauce, perhaps a spicy razor clam sauce, a la Santiago. I will find you, and I will eat you. 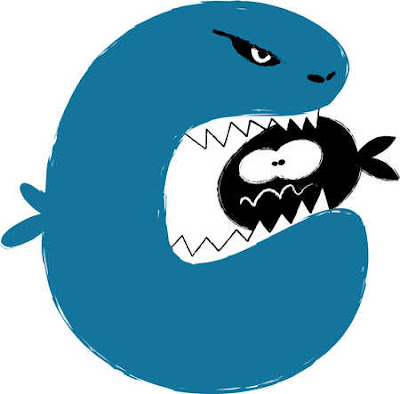