Argentina has the highest meat consumption per capita in the world. Above all other meats, beef is king in Argentina. The cows feed upon nutrient rich grass, resulting in healthy, essentially "free-range" cows. In Buenos Aires, a "parrilla", or steakhouse is as common as a Starbucks in the United States. 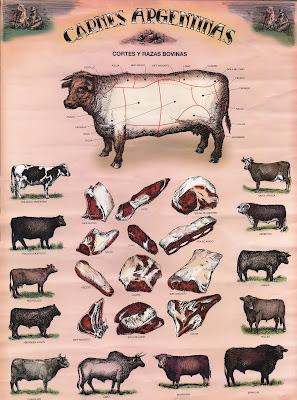 I arrived in Buenos Aires having made only one plan: to eat my first meal at an authentic Argentine parrilla. I try to avoid tourist traps and the most expensive restaurants when I travel. Thus, after much internet research, I decided that Rachael (a friend also visiting Buenos Aires) and I would eat at El Obrero, a restaurant in La Boca.

Now, people who say that Buenos Aires is the Paris of South America are probably not referring to La Boca, a run-down, tough neighborhood founded heavily by Italian immigrants. Very poor, many immigrants constructed their homes out of sheet metal. It is said that, as they could not afford to buy paintings to decorate their homes, they decided to paint their homes in bright colors in an attempt to make the neighborhood more attractive.

La Boca is not a place to wander off the beaten path, and, as such, Rachael and I arrived by taxi to El Obrero. 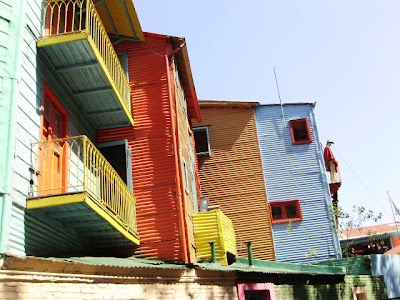 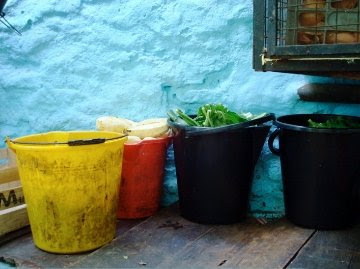 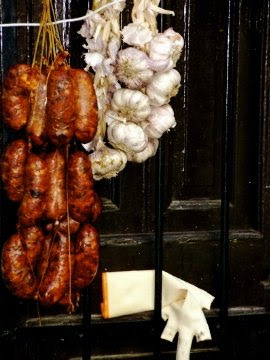 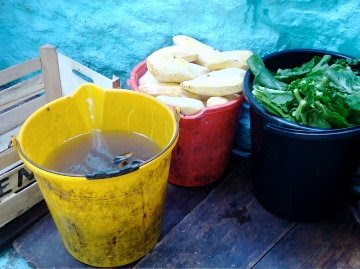 The inside of the restaurant was an homage to futbol (soccer). La Boca's pride and joy are the Boca Juniors, whose stadium stands a few blocks from the restaurant. 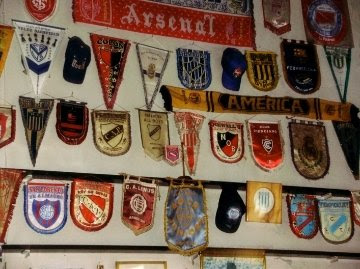 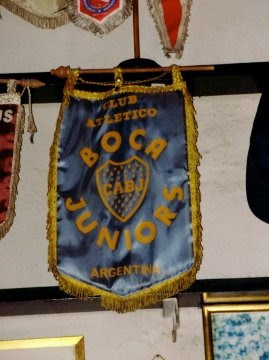 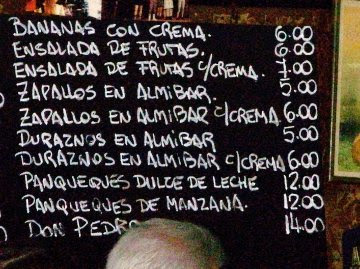 We started with a roasted eggplant appetizer. It had smoky taste and was marinated in vinegar and olive oil. 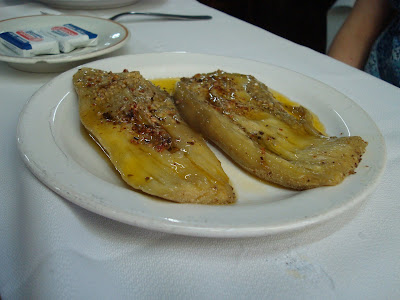 We also ordered "provoleta," baked provolone cheese garnished with herbs. Most Argentine restaurants have varying degrees of influence from Italian cuisine. Our restaurant was a blend of Spanish and Italian cuisines, with pure Argentine beef. 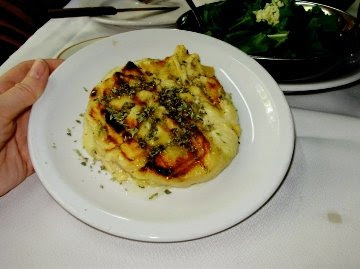 Giant slabs of beef lay on a cutting board in the open kitchen. The waiters took turns cutting and tending to the beef as it cooked. Only men worked the grill and as waiters-common in most Argentine restaurants. Perhaps a bit of machismo in the workplace? 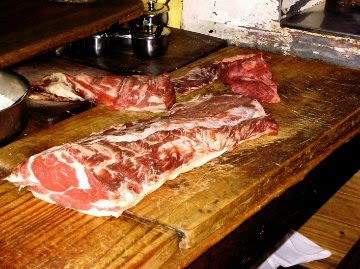 Our waiter was from La Boca and had been working at El Obrero for over 10 years. His favorite steak is Bife de Chorizo, which is a juicy but lean cut, similar to our Porterhouse. 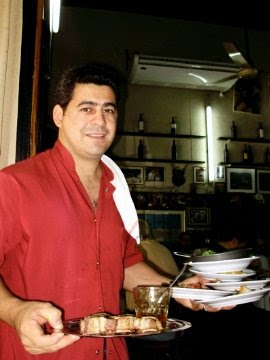 We decided to order 3 cuts of meat: bife de ojo (an eye filet, or ribeye), tira de asado (a rib roast) and bife de chorizo (the porterhouse). We ordered our steaks "a punto," which means medium rare. Unlike Europeans, Argentineans prefer their steak more well-done. 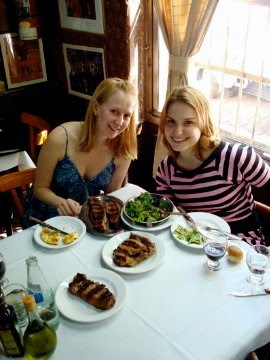 The steaks' arrival was a wonderful moment for us, as evidenced by our inappropriate joy. It took all of our self-constraint to photograph the steaks before slicing and devouring the beef. 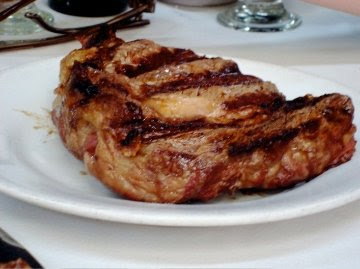 Above is the bife de chorizo. Below is the eye filet. 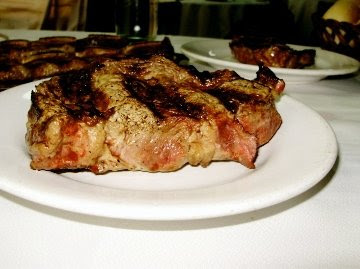 The rib roast, or tira de asado, appeared juicy, but the effort it took to remove the meat from the bone almost negated the joy of eating it...that being said, the process did not take much effort. Supposedly tira de asado is one of the most popular cuts, but I did not find it memorable at all. 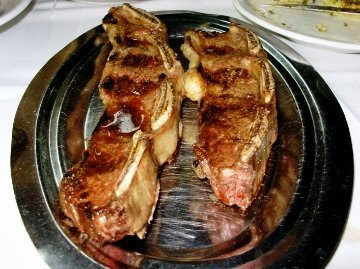 The eye filet, below, and the porterhouse were, in contrast, thick and juicy. They had the ability to both be a teeny bit chewy but then melt apart in your mouth seconds later. 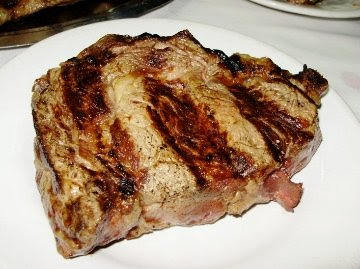 Argentine steak is prepared with only salt and pepper. To marinade the steaks would ruin the omega-3, grass fed cows' unique flavor. That being said, chimichurri is a most popular accompaniment. The sauce is typically made with olive oil, garlic, parsley, bell pepper and vinegar, but there are as many variations as Argentine grandmothers, so each restaurant has its own recipe. 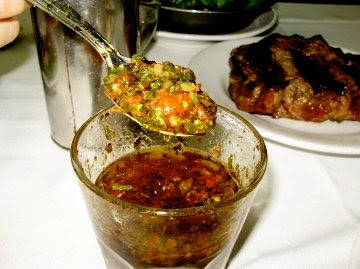 Some close ups of the cut eye filet-notice how juicy it is, even after being cooked past medium-rare. 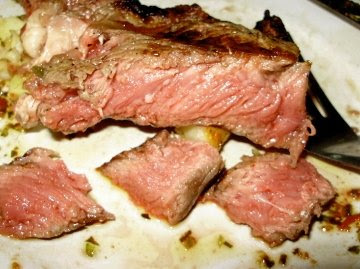 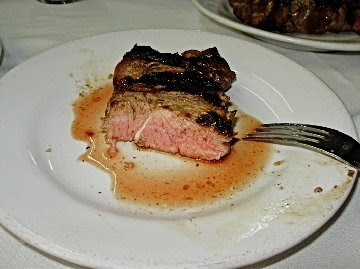 While eating our meal, we were interrupted by several argentinos. The baby boy Alvaro was the most friendly. He continually visited us to try to give us a spoon, or take Rachael's camera, or just stare up with a goofy look on his cute little face. 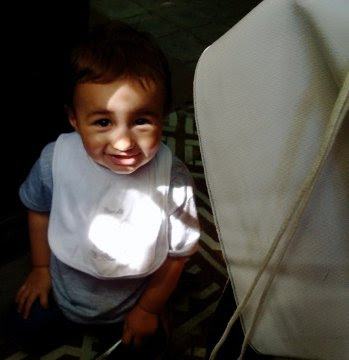 The table next to us comes to El Obrero every Saturday. Why? The man on the left's reason: "porque Mario paga," because his friend to the right, Mario, pays for the food. In all seriousness, when the group entered they were greeted by name by the entire wait staff . That seemed to be a common theme during our 3 hour meal. While the steak was excellent, I suspect that there are better parrillas and better steak, but the lively atmosphere and neighborhood feel of the restaurant made us comfortable. The men at Mario's table asked us many questions about our plans for our time in Buenos Aires and offered suggestions, as well as a ride back to our hotel. We accepted the suggestions but definitely declined the ride! 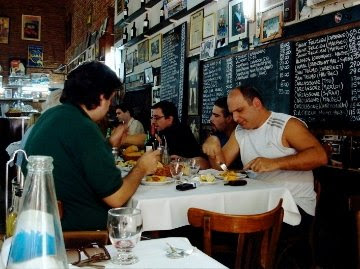 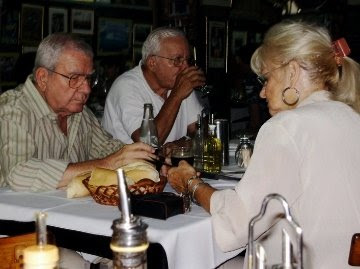 For dessert we split "pave de dulce de leche," a moist dulce de leche cake topped with whipped cream. It reminded me a lot of "pastel de tres leches," a cake soaked in sweetened condensed milk. It was so delicious. We ordered coffee as well. Cortados, tall espresso shots with a little steamed milk. The perfect end to a mostly perfect meal. 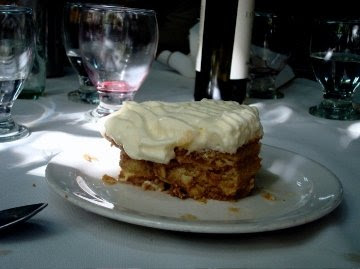 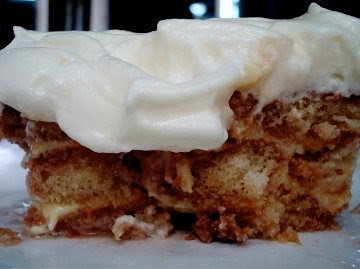 Later that night, at a hotel lounge, we randomly met one of the more bizarre people I have met in my lifetime, the guitarist (I believe) from the 80s group Iron Maiden. Completely unrelated to steak, but still, kind of cool! : ) 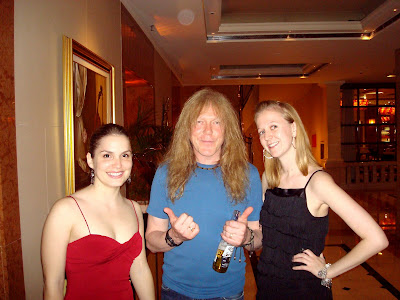 Later this week I will post about our empanada-eating Odyssey...stay tuned!
Posted by Caitlin