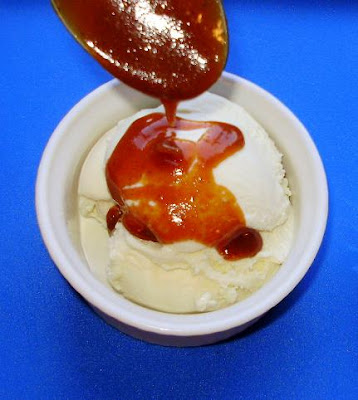 After a fruitless search for Dulce de Leche around my neighborhood, I had purchased all the ingredients I would need to create my own elixir; milk, sugar and vanilla promised to result in a tempting golden sauce. Also called cateja, leche quemada, doce de leite and manjar, this seductive blend of caramel and vanilla can be found throughout South and Central America.
After slowly simmering milk, vanilla and sugar, the majority of the water in the milk evaporates and the mixture thickens; the resulting dulce de leche is the caramelized product of the Maillard reaction. You can also submerge a can of sweetened condensed milk in water and boil it for several hours, but there is always the slight possibility of a can of molten caramel exploding in your kitchen. Personally, I would prefer to avoid burns, especially when the burning substance sticks to you.
My dulce de leche turned out darker than what I have previously eaten. Perhaps flakes of dark brown from the vanilla bean contributed to the color, or a slightly elevated or lower temperature made it darker, I don't know. I was a little sad at first, thinking it would taste grainy or like burnt sugar, but upon melting it today (1 day after it was finished) and drizzling it over vanilla ice cream, I will stand behind my recipe (well, the food network's recipe, to be exact).
Recipe is from the Food Network's website, thus the italics, to show "it's different from me". I copied their instructions, as mine were more a bit more spastic. Picture me raising the heat, going into the other room to study, the mixture bubbling up with me running back into the kitchen after forgetting about it, swearing as I tried to stir out any foamy parts.
To Make:
4 cups whole milk
1 1/2 cups sugar

Combine the milk, sugar, vanilla bean and seeds in a large, 4-quart saucepan and place over medium heat.

Bring to a simmer, stirring occasionally, until the sugar has dissolved.

Once the sugar has dissolved, add the baking soda and stir to combine.

Reduce the heat to low and cook uncovered at a bare simmer.

Stir occasionally, but do not re-incorporate the foam that appears on the top of the mixture.

Continue to cook for 1 hour.

Remove the vanilla bean after 1 hour and continue to cook until the mixture is a dark caramel color and has reduced to about 1 cup, approximately 1 1/2 to 2 hours.

Strain the mixture through a fine mesh strainer.

Store covered in the refrigerator. Drizzle over bananas, strawberries, crepes, on ice cream or cake.